Sometimes a design idea launches itself at you and demands to be made. Demands, I tell you! It’s mostly why I began sewing in the first place, just to shut it up.

This linen peplum top was one of those lightening strikes. I craved drama, structure and a gritty challenge.

Now, usually my attempts at self-drafting fall flat on their face; I’ve had many failures over the years. But after taking a Craftsy course recently, I managed to ace this one pretty quickly. The lessons have paid for themselves already!

This top features a centre front “Y” bust dart (it’s hard to see, but there nonetheless), back slit with button closure, and lace detail on the inside hem which peaks out occasionally between the folds.

My initial design had no waist seam. It was a voluminous tent top that sat in waves around a hi-lo hem, but I was having problems with keeping the fabric evenly distributed during wear. I didn’t want pleats near the neckline, or multiple vertical seams, so opted for a peplum instead. Although maybe the same could be achieved with a circle skirt design that has a neckline and arm scythe added? 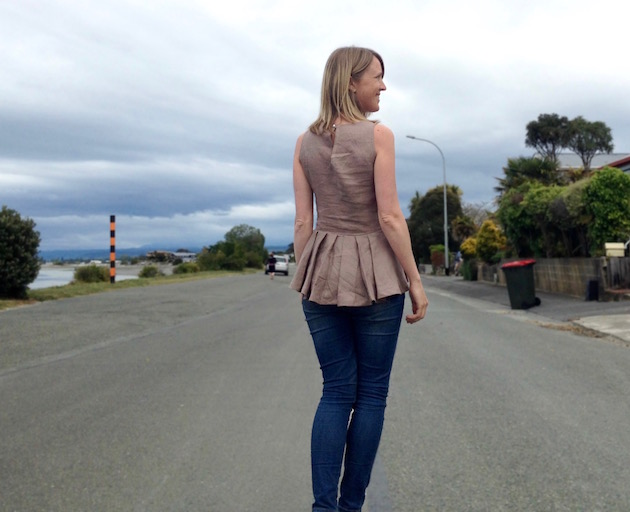 This linen has been in the stash for a loooooong time, so I can’t remember where I found it, but I’m finding linen is a dream to work with. Although it does crease as soon as you hug someone or sit in a car! Terribly impractical, as fashion often is, but at least it’s comfy and breathes well.

It’s so nice having a different style/colour/fabric added to the wardrobe. It helps keep things fresh and fun … and I like that.